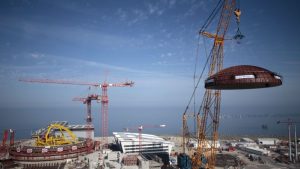 A photo taken on July 16, 2013 in Flamanville, northwestern France, shows a 154 meter high hoist owned by the Sarens company, used on the construction site of the third European generation Pressurised Water Reactor (EPR), to install a dome on the reactor’s building. The nuclear reactor will be put into service at the end of the year 2016, said EDF director of the future nuclear station Didier Ohayon on June 20, 2013. AFP PHOTO / CHARLY TRIBALLEAU